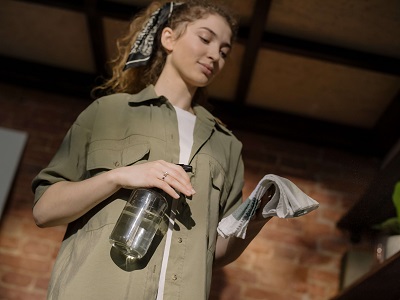 As mentioned in my previous article - Toxic Environment - mould grows in places that have a lot of moisture, such as around leaks in roofs, windows, or pipes, or where there has been flooding. Mould grows well on paper products, cardboard, ceiling tiles and wood products. Mould can also grow in dust, paints, wallpaper, insulation, drywall, carpet, fabric and upholstery.

Your kitchen and bathroom are at the greatest risk for mould and bacteria growth because they are typically areas with moisture. The best way to prevent mould is by cleaning regularly and minimizing moisture. Squeegeeing shower doors after use, repairing leaks, and keeping tile grout clean are effective methods for keeping mould at bay. But even if you’re frequently cleaning and disinfecting, mould can sneak in and make itself at home. Unfortunately many commercial household cleaning products contain chemicals/toxins that are harmful to the environment, so I highly recommend using natural/eco-friendly green cleaning products.

Below are some natural remedies that are great non-toxic alternatives to chemical-based black mould removers, and many of them are also effective against mildew. They are safe for your family and safe for the environment, and are frequently less expensive than commercial brands.

Hydrogen peroxide is an antifungal, antiviral, and anti-bacterial solution found in most medicine cabinets, and it’s an effective mould treatment. You can use it safely on a range of surfaces such as kitchen appliances and counters, bathroom fixtures and tubs, hard flooring, and even certain wall surfaces.

Pour a 3% concentration of hydrogen peroxide into a spray bottle. Test an inconspicuous area of surfaces first to prevent discoloration or damage. Saturate the mouldy surface and leave it for 10 minutes. Next, scrub the area with just enough force to remove black mould and mould stains. Once the surface is free of residual mould and stains, wipe dry.

White vinegar is a mildly acidic product that cleans, deodorizes, and disinfects. It can also kill 82% of mould species, including black mould, on porous and non-porous surfaces. You can use it safely on most surfaces, and its offensive odour goes away quickly.

Pour undiluted white vinegar into a spray bottle. Because white vinegar contains only about 20% acetic acid, adding water makes it less effective. Spray the vinegar onto the mouldy surface and leave for an hour. Finally, wipe the area clean with water and allow the surface to dry. Any smell from the vinegar should clear within a few hours.

From absorbing odours in the fridge to relieving heartburn, baking soda has a multitude of uses around the house — including black mould removal. It’s safe for your family and pets, and it not only kills black mould, it absorbs moisture that attracts mould.

Add one-quarter of a tablespoon of baking soda to a spray bottle of water and shake until it has dissolved. Spray the mouldy area with the baking soda and water solution, then use a scrub brush to remove mould from the surface. Next, rinse the surface with water to remove any residue and baking soda. Finally, spray the area again and let the surface dry without wiping. This will kill any left-over mould and help prevent the mould from returning.

For really tough black mould removal, mix two parts baking soda with one part white vinegar and one part water. Stir the mixture until it becomes a thick paste. Spread your mixture liberally onto the surface and let it dry. Scrub away the black mould and stains, and wipe down with water.

Essential oils have made aromatherapy a household word, but these natural compounds can do so much more. Tea tree oil is an insect repellent, antiseptic, and deodorizer — and it’s one of the safest methods for getting rid of black mould. Tea tree oil is a natural fungicide that cleans up mould quickly and it helps prevent mould spores from coming back.

Combine one teaspoon of tea tree oil (or clove oil) with one cup of water in a spray bottle and shake vigorously to blend the water and oil. Spray the mouldy area, leave it to dry for an hour, and then wipe away with a microfiber cloth or dry towel. Make sure to wear protective gloves, because some people find that essential oils can irritate their skin.

Lemons are a natural deodorizer, antiseptic, bleach, stain remover, and cleaner — and they can also remove black mould. The high concentration of acid in lemons breaks down mould, making it easy to remove and leaves behind a disinfected surface. Along with that wonderful citrus aroma!

Juice three-to-five lemons into a cup and pour over the mouldy area. Let it sit for five minutes and then wipe the surface with a damp towel. You can reapply and scrub the surface to get rid of tough mould stains.

I highly recommend that you use these natural remedies, along with eco-friendly green cleaning products, as it is better for people and the sustainability of the environment.

Check your emails for the free ebook.